A downloadable game for Windows

Bernard, a newcomer to Lostworth, begins to offer help to people with problems. His fame soon spreads through word of mouth. Meanwhile, Bernard is drawn into a web of strange events that begin to unfold with the disappearance of a child.
In an effort to uncover the truth, Bernard will also have to confront some facts about himself.

FEATURES
- Get acquainted with more than 40 original, surprising and realistic characters and listen to their stories.
- Change the flow of the dialogues with the choices you make.
- Learn about people's problems and find solutions.
- Determine both the direction of the plot and the fate of the characters with the choices you make.
- Decipher the passages in the book to learn how to use the materials you have collected.
- Upgrade your reputation score and meet more different characters.
- Read books with your intelligence score and reveal details.
- Remember that you alone control the game.

Add to Wishlist on Steam

Very cool demo which entices for the full release. I want all those books read & the whole village to come get some help. :)

This concept is so good, i really enjoyed the demo! the art style is really charming❤️❤️i have to agree with what others have said though and admit that it took me a while to figure out where i was supposed to start, since the character says to look through the books when in reality you're supposed to explore the map. i also noticed that Mirche's rat's name is misspelled as "Auro" in his character blurb on the map. Other than that, i really liked these characters and i look forward to seeing where this game goes!

Reply
The Medieval Psychologist263 days ago

I'm so glad you like the game. I hope the game will be better,  thanks to these feedbacks. :)

I am so interested in this, when do you think the full game will be released?

Reply
The Medieval Psychologist264 days ago

Thanks for your interest. I need at least 1 more year. Because there are more than 40 characters and a lot of stories.

Please tell me this will be available on mac!

Reply
The Medieval Psychologist264 days ago(+1)

I wanted to play more of this. Absolutely interesting.

The only problem I thought I  could comment on is  that there was no  real tutorial  on anything, so it was mostly just clicking around until someone showed up or something happened.

This needs a bit of work, a bit of polish. However, you're on to something very interesting here and I can't wait to play the full title.

Reply
The Medieval Psychologist265 days ago

I'm very glad you like the game :) I will work on the tutorial.

I was genuinely disappointed when i got to the end of the demo, i want to play more. i don't know how to explain the praises i want to give this game lol!

Reply
The Medieval Psychologist266 days ago

I'm so glad you liked it. I'm still working on the game but there is a long way to go. Thank you :)

This was a lot of fun. The controls were easy to figure out and the decisions gave you a lot of control over the story. Can't wait to see more of it!

Reply
The Medieval Psychologist267 days ago

Reply
Lanosmire269 days ago(+1)
Thank you for reaching out to me! I really enjoyed playing this and look forward to the full thing.

I Enjoyed the art style, and the music while simple fit well with the soundscape. I enjoyed the crafting system, but wish the demo didn't limit what I could mix or wasn't as instanced based.

it's a small bit pick, but nothing that detracts from the full experience. The characters are vibrant and stand out, so they are easily remembered.

Overall enjoyed this and found myself mad when it ended as I was just getting pulled into the game. I recommend this demo, and say everyone should try it out. It's a bit more than your normal visual novel and has great potential.

Reply
The Medieval Psychologist269 days ago

Thank you very much. You are great :)

Thank you for sharing this visual novel with me. I finally got time to get to it and I must say that it's more complex than other visual novels I have played in the past. I'm going to play this in my spare time and see how it unfolds. I wish you luck in future developments of this game and other projects.

Reply
The Medieval Psychologist272 days ago(+1)

I came here expecting something like a consult with the characters, like the modern psycology, exploring the deep problems of life and making a connection with then. Well, I know that I cannot say that it is a bad game because it wasnt what I expected, at the first moment I was dissapointed, but after playing the game, I realized that, even if it is not like I imagine, it was good by itself, I dont know. I liked the atmosphere of the game, but even liking the game, in my opinion there is somethings that may change to be more.. accurated? I dont know if this is the best word to describe, but it is the best I can think.

The ideas are good, the all concept are good, but the execution of then are not. Like the crafting system and the dialoges. I saw the same crafting system dozens of times, just like a point and click, not having a true experience of failing and trying again; the dialoges are poor, that its not good if the game wasnt around then, but it is. The dialoges are rasos, I think that in a game like this the dialoges should be the most attrative thing, but it is not.  But the places, the animations, the graphics, to me, are good, perfect to that time of game, they are simple, "this is what I want to do, and this is what I made", but, again, to a game that call itself "the medieval psycologist" I think that something like expressions would be a good thing to have in game.

All the ideas, amazing. I know it is just a demo, and will change in the future, but this is what I think. I will keep my eye open for the next update, thanks for the game!!!

(and sorry if my english was not that good)

Reply
The Medieval Psychologist272 days ago

Thanks for the feedback :)

Reply
The Medieval Psychologist273 days ago

Your feedback is important for me, please write. 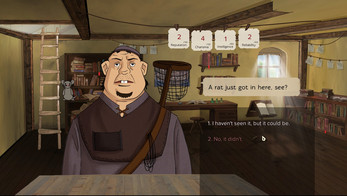 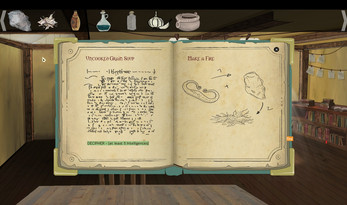 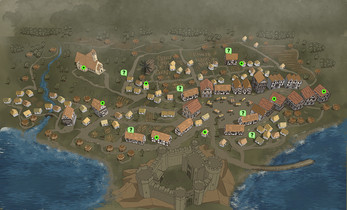 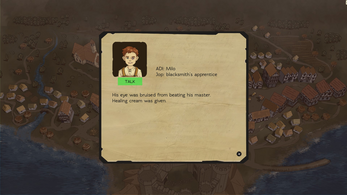 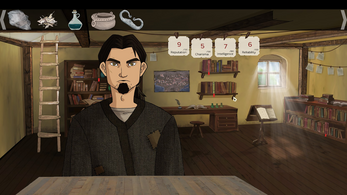 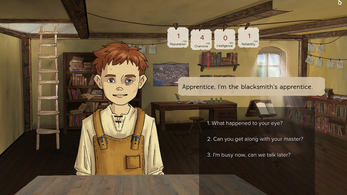